h2>Dating : The Pros and Cons of Being a ‘Mature’ Bride

You’ve got some life experiences under your belt

You’ve been some places; you’ve done some things. By the time I married, I felt like I could be a better partner because I had purchased two homes on my own, buried a parent, survived emergency cardiac bypass surgery, started a business, etc. All of these experiences — for better or worse — left me with the gift of wisdom and knowledge. And, I knew I was strong enough to weather most storms.

You’re more confident in who you are

I didn’t go to college. In my twenties, I felt like that defined me, and I was embarrassed and ashamed by my lack of a degree. When the subject of ‘where’d you go to school?’ inevitably came up at happy hours, I slunk off to the bathroom or bellied up for a refill. Somehow I convinced myself that a piece of paper made others better than me.

As the years passed, I began to value myself more and become more confident in my abilities. I didn’t shy away from challenges, and with each new one, I began to understand that the world provides many learning opportunities — college is just one.

You know what you want

By the time I met George, I knew I wanted a man with certain qualities. He had to be loyal, trustworthy, honest, and reliable. He had to walk the talk. My tolerance for bullshit was zero, and after years of dating, my BS meter was finely tuned.

More importantly, you know what you DON’T want

I was so tired of games. No game players! No misogynistic pigs. No man boys. No man buns (which weren’t quite a thing yet, but would be high on my list).

You’re not inclined to settle

Here’s the thing. By the time George and I met, I had built a life for myself. I had grown comfortable with the idea of being alone. My house was cozy, my bills were paid, I had amazing friends. Did I love not having someone to share my Ben & Jerry’s with? Sure, but not if it meant I had to sacrifice my Chunky Monkey for his Cherry Garcia.

In other words, I liked my own company enough to spend Saturday night on my couch with my B&Js and a good movie — and this was pre-Netflix so that’s saying something.

You understand what’s important in life

Your Ferrari is nice, but I’d be more impressed if you had a relationship with your kids. I’d rather date a guy who shows up with a stain on his shirt and old Levis who is funny and tips well than a guy in a Brooks Brothers suit who brags about his 401k and chastises the waitress.

His stuff + my stuff = Tons of stuff. The question wasn’t what to buy, but what to toss or keep? George actually suggested not having a registry, but once we discovered that when we merged stuff, his ex took everything that wasn’t chipped or mismatched and my stuff looked like it was picked from a college dorm, we changed our minds. No matter your age, a new set of everyday dishes is a good start to a happy marriage.

Whatever life hands you, you now have a partner

My row house was the bomb. I loved it so much, until it rained and my basement flooded. F*#k me. I had just had new carpet installed. I cried, called my dad, and then hired a company to come dry it out with those big fans. A month later, it flooded again. This time, I went nuclear. “The universe hates me! Why can’t I ever get ahead? It’s always something!,” I wailed. I’d have sold my soul to the devil for a partner, a roommate, or a serial killer off the street to help me bail that water (and me) out.

Your sowing your oats days are behind you

I’ve partied ’til the cows came home, danced on top of a bar, mastered the art of playing quarters, made out with a guy in the back of a cab, puked in the girls room and came back for another round. Damn, that was a good night. All boxes checked, and now I’m perfectly content staying home watching Dateline.

You’ve kissed all the toads you need to

I know what’s out there and I know what I come home to. I’m good.

I didn’t always love myself. My self-confidence had been rattled by a few narcissistic men, and I had somehow convinced myself that there was something wrong with me. I didn’t deserve love. I was flawed. It took one amazing therapist, many great self-help books, and a whole lot of positive self talk to convince myself that I was more than enough and that I had a lot to offer.

You WANT a partner vs. NEED one

George often said to me, “It makes me feel great that you want me more than you need me.” He was so used to taking care of everyone and everything that it was a relief to him that I was completely self-sufficient.

You’re set in your ways

George’s laundry methods make absolutely no sense to me. I race him to load the dishwasher because my way is the right way.

Power struggles are a THING

One of our first BIG fights was over plastic storage containers. Yes, that’s right. We’ve also fought over the correct way to wipe off a counter (wet or dry?), fork tines up or down in the dishwasher, how to cook a chicken, etc.

If you’re marrying late in life, be prepared to butt heads. Or be butt heads. We’re experts at both.

My marital dreams included a big, loving extended family. With no kids of my own, I was looking forward to becoming a stepmom — maybe even grandmother. I had three brothers so I was also secretly praying for some sister-in-laws who would initiate me into their sisterhood tribe.

My experience has been that being a stepparent has its own set of issues. Mine is maybe somewhat unique in that my stepson came with serious addiction issues. For better or for worse, right? We are still praying for better.

With my sister-in-laws, I think my expectations were too high. We live in different states, and we don’t have a shared history. We all have established friendships whom we barely have time for. The sisters have a bond. Communication goes direct to siblings, i.e., I’m not included in texts, planning, etc.

I was perplexed by this at first. “Why wouldn’t they want me to be part of their tribe? Why wasn’t I invited to lunch with the sisters?” Then I took a look at my own family. I was very close to first marriage sister-in-laws. We were all younger, I was part of their dating history, in their weddings, present at the birth of their children, etc. With each divorce and subsequent remarriage, I took a step back. I was happy for my brother(s), but had my own life, friendships, etc. I didn’t necessarily have (or make) time for bonding with their new partner. Life just wasn’t conducive to forming those friendships. Maybe my heart was a little hurt, I felt an allegiance with the ex, or I was scared to form an attachment to someone who might go away.

You don’t have ‘history’

I never met ‘Red,’ George’s dad, and that makes me sad. Apparently, he was quite a character. I think we would have gotten along famously, and I’m pretty sure we would have been partners in crime. George didn’t meet my mom, but I know she would have ADORED him. I’m sure she is smiling down knowing that I landed a good’un. We both have lots of friends from the way, way back machine. We try our best to bring each other into conversations, but sometimes it’s tough not being part of each other’s past.

You weren’t there for the ‘cooing’ baby part

As I alluded to, the issues around my stepson’s addiction have been hard on all of us. There have been countless fights, many hours spent in therapy, lots of tears shed, and a lot of money spent. It wasn’t a surprise. The addiction monster raised it’s head early on. We were awakened the first night I stayed over by a call from the cops. To say it has put a strain on our relationship would be an understatement. I often think it would be easier if I had been around for the cute toddler years or had some pleasant memories to lean into for the days I am overwhelmed by my own frustration and anger.

Sadly, a majority of our years together have been tainted by manipulative and emotionally abusive behavior. It is a continuing lesson in patience, compassion, and empathy. We keep a baby picture on our dresser which helps remind me of that cute little boy who is still struggling to find his way in the world.

You have a lot of baggage

And, I’m not talking Tumi. I may or may not have some commitment issues. Mentally, I’m packing my bags and leaving every time we fight. George has what I consider PTSD from years of coping with his son’s addiction. When we were merging household goods, George got enraged when I went to toss a faded, very old plastic cereal bowl. WTF? Dude — it’s not even part of a set. What’s your deal? Turns out, he felt as if his ex had taken everything and now it was happening again. That bowl was his, and no one was going to take it away from him. That bowl now holds prime real estate in our cabinet.

Your independent nature is your default

While George loves that I’m not needy, he also needs to be needed. My instinct is to pick up the box and carry it to my car until I realize that this is offensive to George. He wants to HELP his wife. “That’s what I’m here for,” he says. Yes — I am perfectly capable of washing my car, mowing the lawn, and fixing the toilet, but George’s love sign is acts of service.

George was married for 17 years before they divorced. My longest relationship was with my cat. Most days I think I suck at marriage, but I’ve learned that a lot of what makes a successful marriage is in the staying and the listening and the accepting.

Read also  Dating : A Kind Act for a Boy with Autism 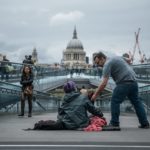