Dating : First date went well but unsure how to feel about it now

Most people will probably say « wait and see » because at this point, the situation is unclear but I’m still going to ask advice.

I’m 39 and yesterday, after a long dating hiatus, I went on a date with a woman I met on Tinder that’s 40 and has 4 kids. I don’t mind women with kids. Been in relationships with such ladies before and I usually get along with kids just fine.

The date went well. There were no awkward silences and after we had a drink or two, we went for a super long walk in the park, at night, in the dark but she didn’t seem to mind (it was her idea)

I noted a few signs of interest:

– She laughed at my stupid jokes. Or when I made facial expressions that are funny, she laughed too.

– She didn’t really flick her hair, but I did notice she fidgeted a log with her bracelet.

– She didn’t mind when I put my hand briefly on her arm. No pulling back, but I didn’t leave it there for long either as to not make her uncomfortable.

– She leaned in closer on the table on multiple occasions and didn’t seem to want to stay distant.

– When I told I enjoyed it too and asked if she wanted to go on another date, she said yes (though it’ll have to wait till July because she has the kids till then)

– We actually kept talking way longer than planned. On multiple occasions we were like « ok time to go home this time. This reminds me of that one time where…. » and she went on talking again. Which I didn’t mind

– Towards the end of the date, I said I felt like hugging her and she said that I could. So we hugged, she rubbed my back and we both agreed it felt good after such a long period in covid-confinement. I jokingly told her I hoped it didn’t feel too awkward when I asked for a hug but she said that no, it was fine but that if I had asked to kiss, she wouldn’t have agreed (which I can kinda understand on a first Tinder date)

All this sounds kinda positive right? Well a couple of things make me hesitate.

During the date, she said she didn’t feel like that instant « click » and instant chemistry or infatuation, but she did add that she believes in love that can grow more slowly over time. And after that she did also say « if you date me, please do keep in mind I have a lot of baggage I carry ». She told me about it and she did go through a few things. She didn’t ahve an easy live and she also added that she was wary of online dating because she was massively disappointed when a few first dates ended with the guy just wanting sex and admitting he’s married… but she seems like a strong woman because she’s living a normal, productive life.

The fact that she said this does indicate that she doesn’t find the idea of dating me impossible.

After the date, since we were both with the bike and it was really late (past midnight, we really had a longer date than we thought) I asked her to let me know by text once she arrived safely at her house. She did let me know. I told her again I had a nice time and would like to have another date with her in the future. She said that the date felt like it went really smoothly, as opposed to other dates she went on, and wants to go on a second date too, but she also added that she’s conflicted about those thoughts of instant chemistry/infactuation VS love that can grow.

I told her that I just had a good time and that I would love a second date and that we’d just see how it goes from there.

I know I can’t do much more than just let it flow and see where it leads us, but did I fucked up somewhere or would you say this is pretty much a lost cause? I mean if she suggests being just friends, I’ll kindly decline because I have enough friends and I’m interested in a romantic relationship. 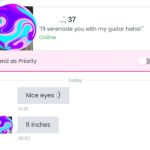