Dating : Women of /r/dating: What made you stand someone up?

I’ve been dating a long time and never been stood up.. until now. Twice, actually, in the same month. Not fun!

I’m curious as to why you would stand someone up; I’ll outline interactions with the two girls that did it recently – maybe you can shed some light on these happenings as well.

Ebony was a really hot dark skin girl I met on OKC. We chatted for a while, things seemed really great, and she suggested we meet (actually I suggested it/asked when she was free, she brought up the idea for the meeting). She said she was thinking about going to a First Friday thing we do in our city where there’s vendors and such/small events/things to do like shows & live music. It was raining that day (which didn’t start until I was halfway there). She had apparently sent me a message around 15 minutes after I left saying she wouldn’t be going because it was raining, but I couldn’t see it because OKC was having issues [or something]. I got the message almost an hour later when I was already there/had been ~10 minutes. I sent her a reply saying okay and if she wanted to come there was plenty to do indoors. She deleted her entire account 2 minutes later. What a bust.

Ivory is a girl I messaged on PoF about 2 months back. We talked for a while, I got her number, and things were pretty decent. I tried asking her out twice (two Saturdays in a row), but she always had to work. She said ‘I would like that’ both times when pushed meeting into the future, but the last time I moved on/started doing other things.

About a week ago (last Friday I think), I invited her out to dinner at a place with live music. I really didn’t expect a response, or the usual « I’m working », but she said she was babysitting and couldn’t that night. She proceeded to dump her recent problems on me (about to get fired, was suspended, medical issues). I didn’t know how to take it at first but I decided to be supportive/let her vent. She apologized a few days later and we started to talk. Wednesday she invited me to her place and we were supposed to get together Saturday.

Fast forward to Saturday, I’m asking for a time but she keeps saying in the evening. As the day goes on, she keeps pushing it back/letting me know it will be late. Finally she tells me (around 8 o’ clock) that her sister got called into work and she had to take her mom to her sisters and help her babysit. I had pretty much given up at this point so no real surprise, but it still bugs me that after all that she decides to blow me off; I kinda think she did all along.

She offered to reschedule to 10pm Friday night after she gets off of work, but I was already pretty turned off by the idea for Saturday – I’m trying to get to know people/find a relationship. I was reluctant about being ‘some dick’, but I figured whatever, she seems okay and we have stuff in common so maybe she’d be a good FWB (she changed the terms but I hesitantly went along with it; I was already turned off from a relationship perspective but whatever – things change).

So what are your thoughts on the two girls and what do you think it all meant? I kinda just think they were both being shady (even tho all I did was be nice/show up authentically). Would love to know why you ditch guys/make plans then bail (not saying you do, but if you have, what were the reasons behind it). I’ll be stacking dates from now on from like most to least, because I won’t let this keep happening and considering this is #2 in 1 month it seems to be becoming a trend. 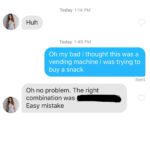