…before meeting my now-wife.

I was on a 2nd or 3rd date with this Iranian girl I met on OKCupid – it was at her place and her brother was in the next room doing his thing. We’re making out on the couch you know, having some pretty innocent fun. But apparently there is this thing they do in Iran (don’t quote me, I’m just selling it like I bought it) where you take a sip of wine and then like baby-bird it into your partner’s mouth, like a nasty wine-spit waterfall. It’s supposed to be erotic I guess but I was really grossed out by it.

No red flags so far – nothing wrong with her attempt, but I’m just not into it. I just tell her I don’t like that and can we just fool around normal like? She didn’t get the message, and did that shit again! I guess she just figured I didn’t know I like it yet and needed another shot at it. Now I’m fully disgusted, and weirded out by the fact that her hairy brother is just a thin wall away.

I’m out. I make a polite excuse to leave. She’s pretty drunk by now from what little wine she managed to not regurgitate into my mouth – so she grabs my arm and slurs, « nooooooo, don’t goooooooo. » and basically refuses to let go and allow me to leave. I finally manage to extricate myself and walk down three flights of stairs to my car, having fully decided that I would NOT be seeing her again.

It was only after I started my ignition that I realized I had left my phone in her apartment. 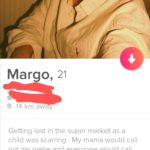